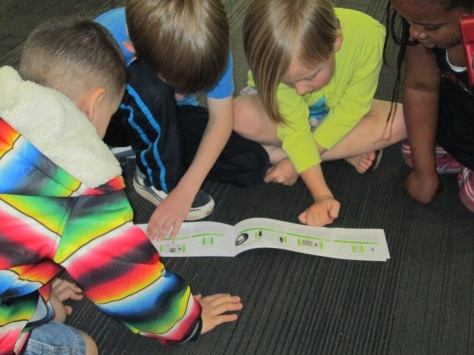 I have to take a moment to brag on another teacher and group of students in our school.  Kelly Hocking is an amazing Kindergarten teacher, and she has a talented group of Kindergarten students who are some of the biggest researchers and creators in our school.  I love how each year she finds something that her class takes an interest in and somehow weaves into every subject area and standard that they study in Kindergarten.  One year it was art.  Another year it was a study of maps and stretching the imagination.  This year it was space.

Kelly never knows at what point in the year something will pop up as an interest in her class, but this year it happened when they were doing a GoNoodle.  It happened to feature space, and it took the class into a series of questions and wonderings about space.

They started reading lots of books about space as well as studying the science standards about the day and night sky.

The more they read, the more they started to notice about space popping up in so many areas of their curriculum and life.

They launched into research mode and asked lots of questions.  In the library and classroom they used print and digital resources to learn about the planets and collect facts about each one.

In February, the class celebrated Fat Tuesday by dressing as planets and parading around the school.  Each costume was space-inspired and they handed out coins and beads to lots of classes.

Research continued in the classroom and the media center.  Students used all of their facts to write a series of notes.  In groups, the students put those notes in an order that made sense and prepared to make their own ebooks about space using the Storykit app.

At this point, we were approaching poetry month, so I suggested that the students think about space poetry.  I connected the class with several poetry books about space, and they started crafting some poems in class.  Ms. Kelly also has ukuleles in her classrooms, so the poems eventually were turned into songs with music composed by the students.

At our annual Poem In Your Pocket day, the groups of students performed their poetry songs for a live audience.  We even had poet, Laura Purdie Salas, listen in to the poetry since students were inspired by her space poems and songs.

At this point in the year, lots of attention turned to Mars and space exploration.  Students really didn’t want to travel to Mars themselves, but they did want to think about helping other people get there some day.  We created a Padlet to collect all of our research in the library and the classroom.

Eventually, the students wanted to start making some inventions to help Mars explorers, so we did a lot of tinkering in our Makerspace.  In class, students constructed elaborate prototypes of their inventions and did informational writing to accompany their creations.

If we had more time in our year, I’m sure Ms. Kelly and her students would have come up with even more miraculous things, but it truly was an amazing year of exploration and I’m glad that our library was a part of it. 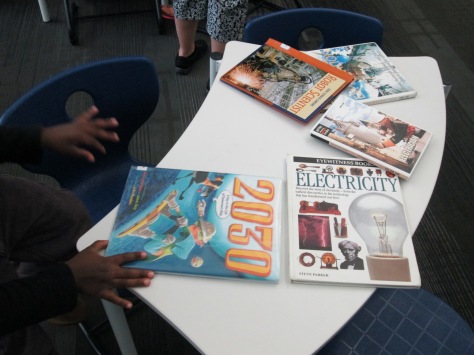 You can read more about the library parts of this project in these posts:

Why Do We Explore Space: A Virtual Field Trip Opportunity

Can a Foodini 3D Printer Go to Space?

Also, you can view Ms. Kelly’s full deck of slides which includes lyrics to a cumulative song that explores all of the planets and the facts the students learned.  They performed this song at our end of the year assembly. 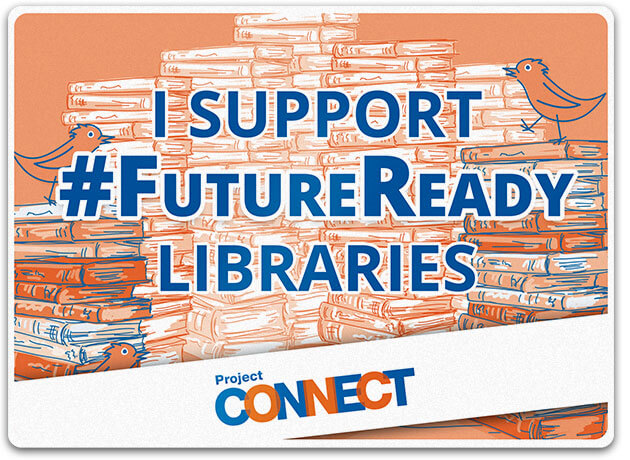