I am so excited to share that this was the very first year our school was served by an amazing program called Books for Keeps. This non-profit group was founded by Melaney Smith and gives 12 new books to every student in 12 of our 14 elementary schools in Clarke County. They also serve schools outside of Athens as well. It takes a massive effort in fundraising, grant writing, and volunteer hours to make this happen in each school.

I’ve had several questions on social media about this program and how it works, so I’ll try to explain it here.

Get excited! Our Books for Keeps books have arrived! #athensga #newbooks #summerreading

Our new program manager, Justin, welcomes a class of fourth-graders at @barrowmediacenter – we are having so much fun serving these students for the first time ever! #morebookstomorekids #communitiestogether

We are off and running here at @barrowelementary , where the first and second graders are having SO much fun this morning picking out @bfk_athens books for the first time EVER! #morebookstomorekids #stopsummerslide #communitiestogether 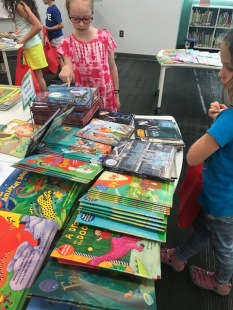 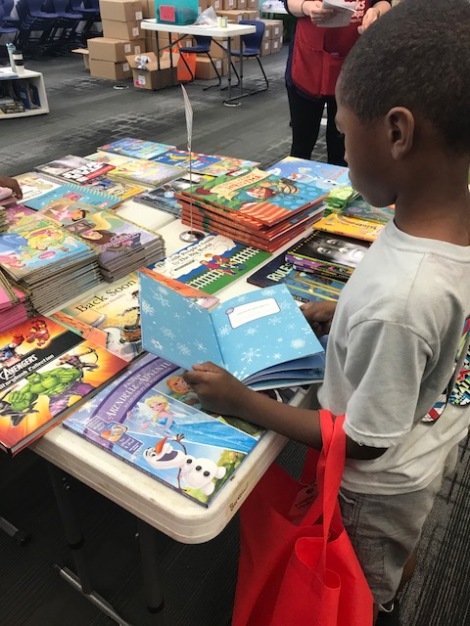 I’ve been hoping Books for Keeps would come to our school for several years.  There have been many initiatives where I’ve tried to get some extra books in student hands for the summer, but none as large as this one. A few things I’ve tried include: 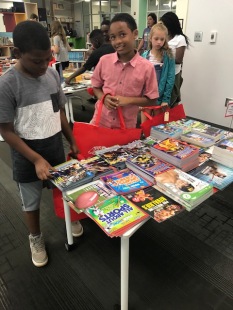 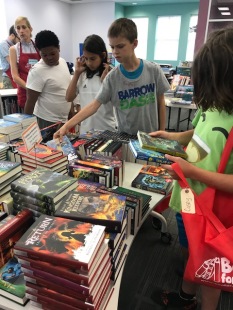 Books for Keeps takes approximately $15,000 per school which means about $30 per child. They rely heavily on donations, so if this program speaks you to, check out their site and make a donation. http://booksforkeeps.org/

These 2 days were amazing and filled with smiles, squeals, and students jumping straight into a book to read.  I’ve gotten messages from families who said that their child got such a great mix of books that were truly of interest. I’ve also gotten thank you notes to send to Books for Keeps with lots of great feedback from students. I can’t wait to see how this grows across the years and how students’ excitement and expectations develop.

Loving these special notes from students for all the Books for Keeps volunteers and donors. #summerreading #thankyou

Seeing every student in the school right before summer began also surfaced some dilemmas and questions for me. A handful of students didn’t want books to take home and weren’t afraid to say that they had no plans to read during the summer because it was their time off. Those comments bothered me, but they also gave me information about work that needs to be done ahead.  Just handing books to them isn’t going to resolve that dilemma. I’m diving into some professional reading to help me begin to think more about this.

I can’t thank Books for Keeps enough for continuing to work tirelessly to get books into kids’ hands. Even with some bumps in the road, it’s an amazing program that was overwhelmingly welcomed by teachers, families, and students. Thank you to every donor who made the funding available to purchase books and thank you to the many volunteers who put in countless hours to prepare for these 2 days.

Use the force #starwarsday

The signup was open to any classes. Three 5th grade classes, one Kindergarten, and one 2nd grade class signed up. We opened each session with Star Wars music and a reading of Chewie and the Porgs by Kevin Shinick. As students were seated, they selected one of four cards: porgs, jedi, storm troopers, and wookies. This sorted them into 4 groups to move into centers.

I knew our time would disappear quickly, so I wanted helpers at each rotation. I made a signup genius to send out to families, but I also invited 4th and 5th grade students to sign up.

Tomorrow….May the Fourth Be With You! #starwars #starwarsday #centers

This station was inspired by the Origami Yoda series by Tom Angleberger.  Students saw the book series and then followed either a Youtube video (more difficulty) or printed visual instructions (easier) to create their own origami Yoda. The finishing touch was using black marker to add eyes, mouth, and any other details.

For the Kindergarten class, this station adjusted to making a Yoda headband since their fine motor skills aren’t as great for creating origami. They traced Yoda ears on green paper and added them to paper headbands.

This station was a hit. We used finger lights that I purchased on Amazon and put straws over the LED light. Students cut the straws to the length they wanted and used washi tape and feathers to jazz them up. We loved watching the tiny light saber battles that ensued. I put book at this station that featured light saber duels on the cover. 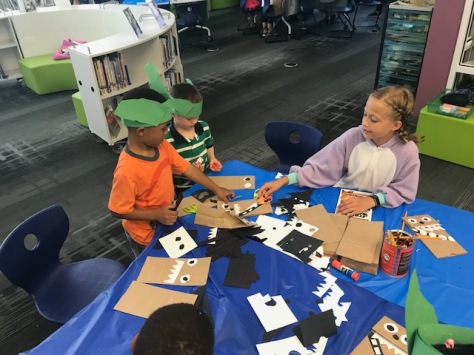 Students used brown paper lunch bags with white & black construction paper to create a Chewie puppet. I didn’t use stencils for this station. I simply made an example and let them cut out teeth, eyes, and a nose in their own style. We did offer the Kindergarten class a few pre-cut objects to choose from.

At this station, students finished partial Star Wars drawings by adding their own creative details and coloring. I loved the impromptu storytelling that happened as students created their scenes.

Next year, I want to think about how I can expand this opportunity to more classes. I also want to think about more stations that connect with various areas of the curriculum. Each of these stations connected with a book, writing, or storytelling, but I would love to weave in some space science and some math. I’ll think on that, but overall, I loved seeing the enthusiasm of students especially in the Kindergarten and 2nd grade classes.

May the Fourth be with you! 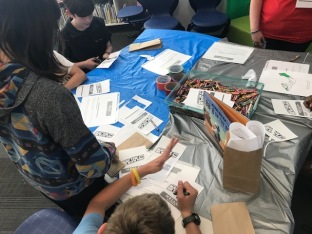