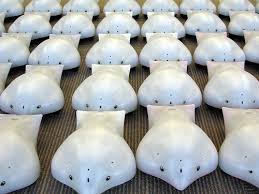 It is officially summer in the Barrow Media Center, so things will be a bit more quiet here on the blog for a few weeks.  Summer is a time for recharging, reflecting, and dreaming up ideas for the upcoming school year.  I’m excited to announce one of a few summer announcements that will be coming your way.  Our library makerspace will feature 12 Finch Robots by BirdBrain Technologies during the 2015-2016 school year.  The robots are on loan to us for the entire school year, and this loan comes with the possibility of these robots being a permanent donation to our space.

A few months ago BirdBrain Technologies announced an expansion of their Finch Robot loan program to include libraries.  I immediately contacted them to see if school libraries were included in this opportunity or only public libraries.  They encouraged me to apply, so it didn’t take me long to put together a proposal for these robots to become a part of our makerspace for use within the curriculum as well as our exploration time.  I’m also dreaming up some fun events for hour of code in December that will involve students, teachers, and families.  These robots will of course be a part of that as well.

We are excited to start exploring suggestions for using the Finch on their site.

What exactly is a Finch?  This video explains it best in three minutes.

I can’t wait to see what students are able to accomplish with this new addition to our makerspace.  For now, here’s the official press release from BirdBrain Technologies.  I’ll share what we do when the robots arrive in August.

David C. Barrow Elementary has been selected to participate in the 2015­2016 Finch robot loan program. The program will provide the school free access to 12 Finch robots for the 2015-­2016 school year, allowing over 600 students, teachers, and families exposure to an engrossing and interactive tool for learning computational thinking. BirdBrain Technologies, creator of the Finch, offers the loans to inspire young coders across the country, especially those who might not ordinarily have the opportunity to program a robot. The Finch robot is a product of Carnegie Mellon University’s CREATE lab. The Finch is designed to support an engaging approach to the art of computer science from preschool to college, with support for more than a dozen age­appropriate programming languages and environments. During 2014 Birdbrain Technologies loaned out hundreds of Finch robots to school districts across the country, and reached over 15,000 students.