We love trying new things in our makerspace, so this February we decided to leap into Rubiks cubes. At AASL in Louisville, I visited the You Can Do the Cube booth and checked out their Rubiks cube lending program. You can check out sets of Rubiks cubes to create Rubiks cubes mosaics and simply pay for the shipping and handling each way. 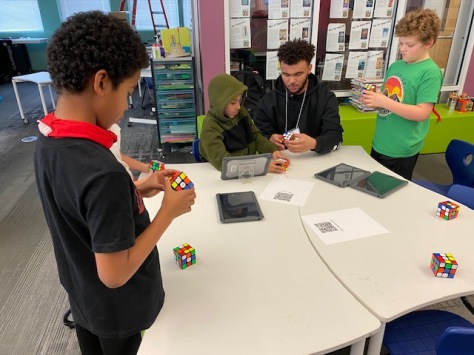 I shared this idea for our makerspace with Gretchen Thomas at UGA and she was excited to give it a try.  We collaborate with Gretchen and her students every Tuesday and Thursday in our open makerspace time. Instead of waiting on an available kit in the lending program, she decided she could use some funds to purchase some inexpensive cubes on Amazon. She ordered 120 3×3 cubes and 50 2×2 cubes.

In class at UGA, Gretchen’s students watched multiple videos on how to solve Rubiks cubes and worked to learn some strategies that would be helpful to our Barrow students. They also practiced designing their own small mosaics using the 3×3 cubes. 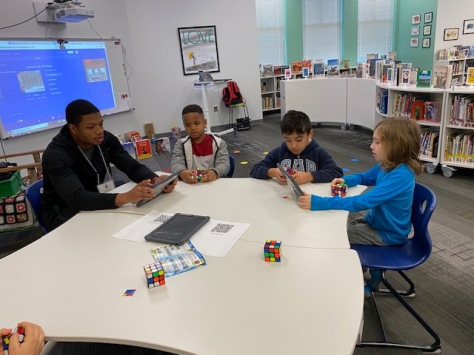 At Barrow, we selected some prepared mosaics from the You Can Do the Cube site. We chose Rosa Parks for our 3×3 and a flower for our 2×2. I measured out a grid on a piece of butcher paper and taped the individual mosaic pieces into the grid and numbered them.  I made a second set of pieces that we numbered and cut out and put into an envelope. Students could select a picture out of the envelope, solve that picture, and place it onto the correct square in the grid. 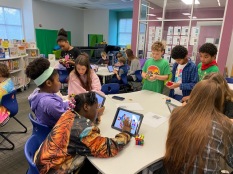 For our open makerspace, teachers sign up students for a 30-minute slot on a Google document. They are signing up for all 6 Tuesday/Thursday sessions of Rubiks Cube. For this first session, students spent time exploring the cubes.  I made a QR code for students to scan to watch tutorial videos about solving. Some followed these videos, while others learned from the strategies of friends and UGA students.

It was amazing to see how many students already knew some tips about solving Rubiks cubes because of their own practicing at home.  We also downloaded an app on the iPads called Cube Solver that allows you to put in the colors on the cube and it shows you all the steps to solve the entire cube. Some students used this as a tool for learning more about the different turns required to solve. 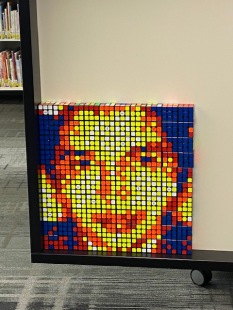 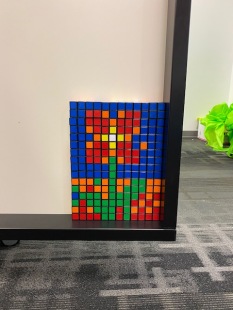 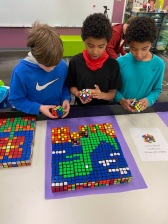 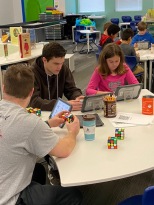 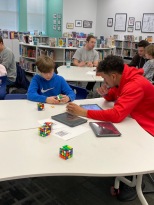 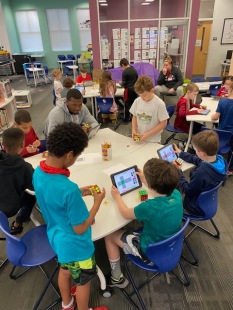 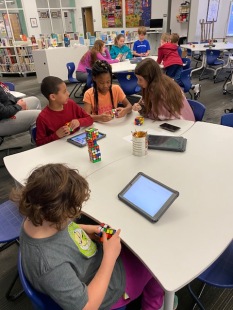 Once students felt comfortable with the cube, they started solving actual pieces of the mosaic and adding it to our grid located on a large table in the back corner of the library. With so many students working on cubes during one makerspace and with so many students already talented in solving cubes, the mosaic started to take shape pretty quickly. By the end of the 2nd day of working on the mosaics, we had the Rosa Parks and flower mosaic done. 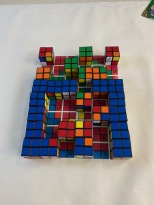 I had already prepared additional mosaics to work on: a dinosaur and Mona Lisa.  We celebrated our achievement of solving the first mosaics and took some pictures. Then, it was time to start dismantling the mosaics and solving a new one. 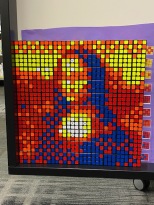 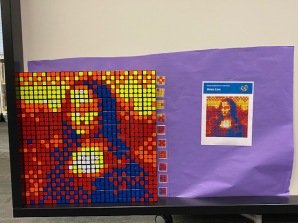 Once we created 2 additional mosaics, I gave the students the option of designing their own small mosaics.  They could do this alone or with a group.  They sketched out their mosaic on grid paper first and then worked to solve and assemble the mosaic at tables.  This would be a great way to extend this experience in future sessions because there wasn’t much time left.

The thing I loved most about this makerspace project was being able to see students bringing in a talent and passion they had outside of school and making it something for school.  There are lots of ways this could be incorporated into grade level curriculum so I hope that this is not the end of the Rubiks cube. We have so many students who enjoyed this that I’m sure we could even just make this a center in the library for people to work on over time.