For several weeks, people around the world have been contributing to our 30-second book talk Flipgrid.  In March, we narrowed the videos to 16 and have been inviting a global audience to listen to the videos and vote on the brackets each week.

After many, many votes, we have a winner!  Congratulations to Evin for her book talk of It Came in the Mail by Ben Clanton.  Adaline’s book talk of I Dissent by Debbie Levy was a very close 2nd place.  Both of these students will receive a special recognition on our morning broadcast as well as gift certificates to our local bookshop, Avid Bookshop.  Please help me in congratulating our winners, but more importantly, continue to share great books with one another!

Back in January, we were inspired by Jennifer LaGarde and Brad Gustafson’s 30-second book talk challenge.  Our 5th graders all worked on scripts and recorded 30-second book talks on Flipgrid.  Thanks to Flipgrid’s new Global Connections feature, our grid was shared with other users of Flipgrid.  I also shared it widely on social media. Over time, students from around the globe started adding their voices to our grid.  Thanks to views, likes, and judge’s choice, we now have a top 16 out of over 90 videos on the grid.

Using Google Drawing, I made a bracket for us to use over the month of March.  Round 1 is now open.  Students were placed into groups of four to compete against one another to move onto the next round.

I also embedded the drawing onto a Google Site with a form for voting.

This is my first attempt at a March Madness style reading incentive.  It is truly amazing to look at all 90+ videos and see how passionate and creative the kids were in their talk.  The real winners in all of this are the students who made the videos and every viewer who takes time to listen to their voices.  The March Madness event is just a little icing on top to celebrate our hard work.

We invite you to join in round 1.  Voting is open through the end of the night on March 17th.  Then, round 2 will be announced.  Please feel free to vote more than once and share with your own networks.

We love Dot Day at our school.  We connect with classrooms around the country across the whole week.  Our students love reading stories and creating dots in creative ways.

This year, our 5th graders are studying cells in science at about the same time as Dot Day, so we decided to connect the two.  Each class came to the library and we spent some time talking about “making our mark” and what that really means.  We gave examples of students who are already making their mark this school year.  I tried to emphasize that a big part of this is trying new things and just seeing where it goes.  We never know when we try something new if it is going to lead us to something awesome.

After this quick mini-lesson, students had a chance to tinker with Google Drawing.  I showed them where it was within Google Drive, but really gave no instruction on how to use it.  They had about 15-20 minutes just to click on everything they could find and see what it did.  Some students found a groove and actually created something they were excited about while others gave themselves permission not to worry about what the page looked like and just get messy clicking buttons. 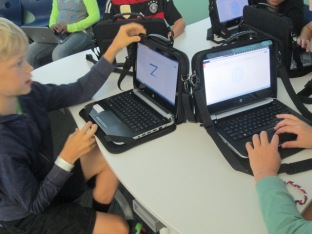 During the tinkering time, there was a group of students who suddenly started using Google Drawing to make their own emoji.  When I started asking them about their work, they were a bit shy at first because they thought they were in trouble.  However, I told them that new emoji are being created all the time, and they never know when their ideas and creations might lead to the next emoji on our phones.  They were eager to carry on with their work.  I saw other students designing their own jewelry and another creating a building design.

Mrs. Freeman, the reading teacher, and I transitioned students from tinkering into using Google Drawing to make a cell for Dot Day.  We pulled up some examples of animal and plant cells and then students referenced those as they drew and labeled their cells.

One of the things I loved was walking around and seeing how unique each student made his/her cell.  One student talked about how the organelles looked like bacon so he actually imported a picture of bacon into his cell drawing.  Awesome! 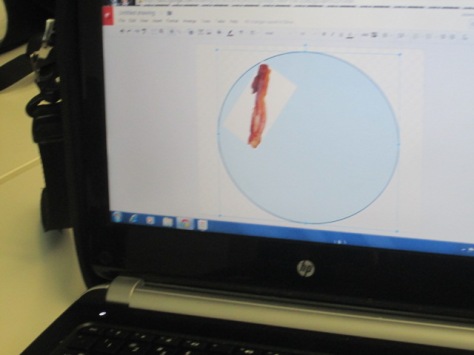 As we neared the end of our time, we took a moment to highlight various student work.  It was selected for many reasons, not just because it had all of the parts of a cell labeled. 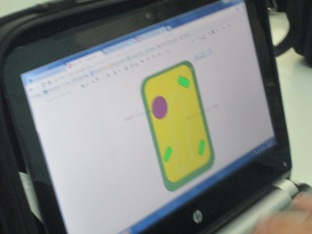 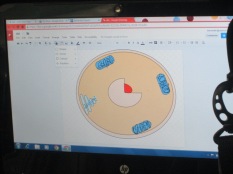 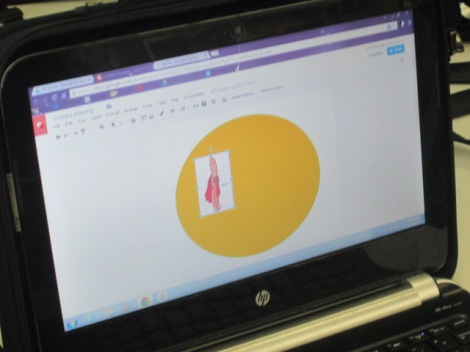 We closed by once again revisiting the idea that by trying a new tool, we are opening up possibilities for future projects and creations that might lead us to making our mark on the world in some fantastic way.