One thing I’ve been very interested in with our makerspace is “making with a cause”. I see so many posts on social media where someone has done something amazing for someone else by using skills and materials often found in makerspaces. From 3D-printed shells for turtles to scarves for the homeless shelter, there are so many ways we can give back to our community through making. 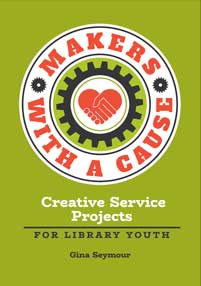 I love that my friend, Gina Seymour, has created a whole book on “making with a cause” and I look forward to my copy arriving in the mail.  Her book, Makers with a Cause: Creative Service Projects For Library Youth, has a whole section on getting started and another section with examples of projects from animal welfare to health/wellness to community service.

For this month’s theme of cardboard, we asked students to think about someone who deserved an award. What would the award be? What would it look like? Why would the person receive the award?  Students designed their awards out of cardboard.  Some made medals to hang around necks.  Others made trophies or even booklets. The only requirement was to use cardboard.

We asked students to start by brainstorming ideas on paper, and then they transferred those ideas onto cardboard. Using Makedo saws, scissors, and canary cardboard cutters, students worked with UGA mentors to cut out their award designs.  They embellished these with duct tape, string, washi tape, and other supplies from our makerspace supply cart.

As students completed their cardboard awards, they came to me at the computer to print a certificate to accompany the award. I found an easy certificate generator called Certificate Magic.

It allows you to choose the type of award you want to print and then fill in the details in a very simple form.  Then, you can download your award as a PDF and print. Students named their award, identified who they were giving it to, and chose a reason for the award. I loved hearing who they were giving the awards to and why.

There was even a special surprise award for me.  Somehow this student kept his award details a secret until he gave me the award.  He even asked if he could have privacy while he filled in the Certificate Magic form.  My award was called “Read More Books” for being a great librarian.  He even made the cardboard award look like a book with the award details inside.

I’m loving this component of our makerspace so far this year and I look forward to seeing what people end up creating for others in the coming months.