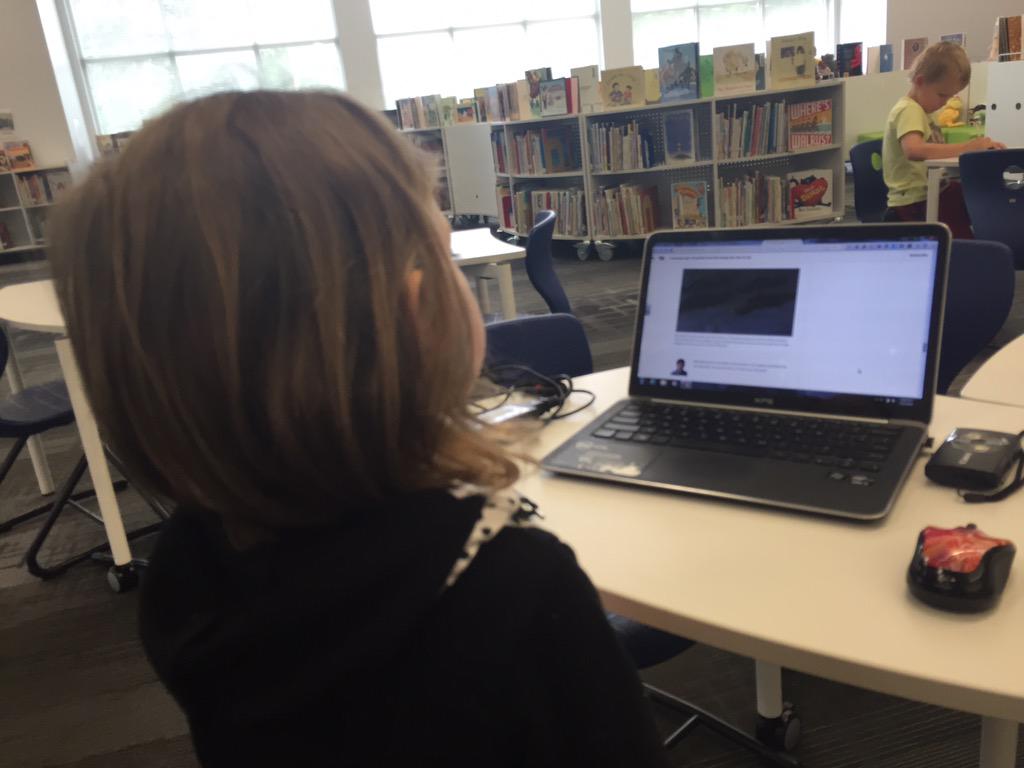 Ms. Kelly’s Kindergarten class is continuing to explore how humans might one day travel to Mars and live.  You may recall that they spent a day in our makerspace exploring several tools that might help them in their research and inventing.

Students are now in the design phase of their project.  They have each thought about a topic that they want to focus on in relation to surviving on Mars.  Some have chosen topics like water, oxygen, food, shelter, robot exploration, and clothing.  They are continuing to research online and in books, but they are also taking time to think about their own dreams of what might be possible in 20 years when we might live on Mars.

A small group of students came to me in the library.  After a quick check in on topics, each student started sketching some designs on blank paper.  I walked around and listened to students describe their designs and asked follow-up questions or shared resources that I knew about.

One girl was focusing on food.  She wanted to create a machine that would dispense food as needed.  Since I knew the kids were familiar with our makerspace, I asked her what she knew about 3D printing.  It turns out that her brother is the very student who designed our Barrow Peace Prize medal, so she knew a whole lot!

I followed this discussion by telling her that there are many kinds of 3D printers including ones that print food.  She looked at me in disbelief, so we went to the computer to look for some information.  We came across the Foodini.  We read some information and then we watched a video about how it worked.

After watching the video, the student went back to her design and started drawing her own version of the Foodini.  She thought it would be great if we could take the storage containers of food into space, put them into the printer, and then print food as we needed it.

She was also very curious about whether a Foodini would work in space, so I said “why don’t we ask them?”  I pulled out my phone, opened twitter, and composed a tweet to Natural Machines (@NaturalMachines).  The student helped me write what to ask.

A kindergarten student wants to know could a foodini work if sent to space? @NaturalMachines #stuvoice #comments4kids

Later that day, we heard back from Foodini.

@plemmonsa Foodini as it exists today needs gravity to work, but it's very possible you will see Foodini working in space in the future. 🙂

I thanked them for answering us back.

@plemmonsa No problem! We love it when kids get excited about Foodini.

It was nice to know that there was a company out there willing to answer a question from a Kindergarten student, and it makes me wonder how many other opportunities are out there for our students if we just step up as the connector between the student and the company.  A Kindergarten student shouldn’t have a Twitter account, but the teacher or teacher librarian can harness the power of Twitter to make that connection for her.

I can’t wait to see what this student comes up with in the end, and I look forward to connecting even more students with the resources they need through my access to social media.

Ms. Kelly’s Kindergarten class has turned a curiosity into a year-long project.  They became interested in space, and it has turned into a research project about planets, creating planet ebooks, writing original songs about the planets using ukuleles, and having a Fat Tuesday parade dressed as the planets.

Now, these students are on a mission to figure out how to support human travel to Mars.  They don’t actually want to go to Mars themselves, but they want to think about what might need to be invented in order to support human travel to Mars in the future.  Wow!  Some might look at a Kindergarten class and think this is silly.  How could students as young as Kindergarten come up with ideas for traveling to Mars?  I think Ms. Kelly’s class proves that even our youngest voices should not only be listened to but empowered as well.

These students have spent extensive time researching Mars.  They know about the land, the weather, the atmosphere, and ways that Mars has already been explored.  They have brainstormed things that they might need to think about when traveling to Mars such as water, food, oxygen, and how to survive the dust storms.

They recently came to the library to read the book  You Are the First Kid on Mars by Patrick O’Brien.

She and I brainstorm a lot over email.  When working with her, nothing is impossible and our biggest limit is time.  She wanted a way to capture all of her students’ brainstorming, so I suggested a Padlet since they could post ideas, websites, pictures, and files.  I set one up for her and they got to work adding to it.

Within their brainstorming, they talked about creating robots that could help them explore Mars as well as several other technology-heavy ideas.  This brainstorm naturally brought us to our library makerspace.  We wanted students to have a time to explore some facts about robots, technology, electricity, circuitry, energy, and space exploration.  Ms. Kelly books an hour of time for student to explore, and I created some experiences for them to move through.

I pulled as many books as I could find on all of our major maker concepts from 3d printing to robotics to circuitry.  I also pulled books about space.  This experience was a time for them to look at lots of pictures, read captions, and skim text with one another and an adult to get ideas that they hadn’t even thought of in their brainstorm.

We have several robotics options in our makerspace.  Since robotics was part of their brainstorm, I wanted them to tinker with a robot that was manageable by a Kindergarten student.  I chose Sphero.  Since Sphero alone couldn’t do some of the things they were thinking of robots doing, I showed them a Youtube video of how Sphero can be combined with other things like a chariot to pull a camera or add an attachment.

Then, students used the Drive app to practice driving Sphero and brainstorming how this might help them explore Mars.

Students have talked a lot about wiring and circuits during their brainstorming.  They really want to wire something that could actually work. I have 2 littleBits space kits which have instructions for creating things like Mars Rovers, Grapplers, and Data Collection Tools.  The age range is high for these kits, but age range never stops us from trying something.  We just look at what barriers are in place and then figure out how to build a bridge.  For this experience, I started students with the instruction booklets.  They got into 2 smaller groups and looked at the diagrams, instructions, and functions.  They started to think about their brainstorm and how these littleBits inventions might work with their ideas.  Then, they moved to a table of littleBits.  In pairs, they used a battery, power cord, and blue power switch to connect to one input (pink) and one output (green).  The idea was just to start tinkering a bit with littleBits to see how they work.  They weren’t necessarily making a space invention yet.

Here’s a quick look at what it all looked and sounded like:

Kindergarten is tinkering with ideas on how to support travel to Mars. #tlchat #ccsdath #science #makered pic.twitter.com/Xoy0dYSlDs

Next, our students will go back into their classroom and continue working on their padlet using the ideas from the makerspace exploration and the books.  They also checked out some of the books to take back.  Then, students will begin constructing prototypes of tools that they might actually invent for space.