World Read Aloud Day “calls global attention to the importance of reading aloud and sharing stories.”  When we connect our students through Skype, Google Hangouts, or other web tools, they experience the power of the read aloud and realize that they are connected with a bigger world that is both the same and different from them.  By connecting our voices through reading aloud, we are reading on behalf of the 758 million people who cannot read. 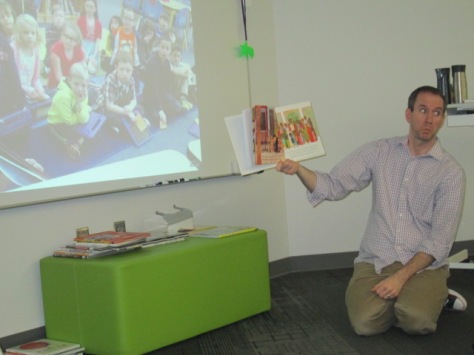 Shannon McClintock Miller and I invite you to start posting your schedules on our shared Google Doc.

When you share your schedule, be sure to include: 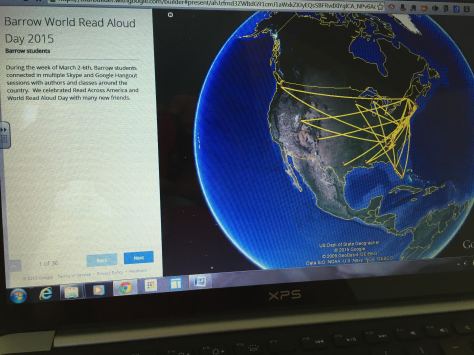 After you post your own schedule, take a look at the other schedules and sign up on someone’s schedule to connect your students.  We’ve found that it doesn’t matter if same grade levels connect with one another. Often times, an older grade can read aloud to a younger grade or younger grades can find parts of a books that they can read aloud to an older grade.  There’s not just one way to connect.  Part of the fun is meeting new friends, planning your read alouds, and seeing what magical things happen during your connection that you weren’t even expecting.

We have many ideas from previous years on our blogs.  You can read more about previous World Read Aloud Day connections on Expect the Miraculous and The Library Voice.  Litworld also has several resources for you to use in your planning and connections including:

Please let us know if you have any questions.  Happy connecting! 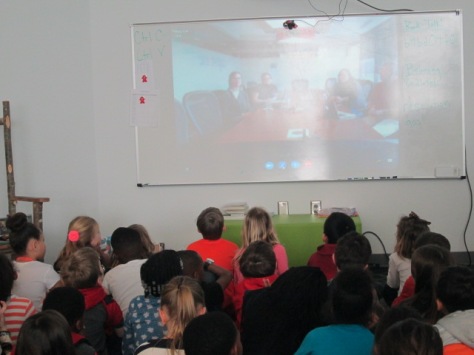 Our 2nd graders have been thrilled by all of the people voting for their Barrow Peace Prize project.  Voting will continue until February 17th, so there’s still time to take a look at their project and vote.

Today, we were fortunate to have a Skype session with the PebbleGo team at Capstone. PebbleGo is a set of databases with informational text focused on social studies, biographies, science, animals, and dinosaurs. The text is geared to students in lower elementary grades, but it is useful for students at all grades as a starting place for research. Our teachers love the accessibility of the text, how the text is broken into consistent  headings, and that it reads the text to students in a human voice. Our 2nd graders used PebbleGo as the first resource in their Barrow Peace Prize research on Jesse Owen, Bessie Coleman, Ruby Bridges, Charles Drew, Langston Hughes, and Wilma Rudolph.

During our Skype, we connected with:

For us, the Capstone team asked in advance:

Our 2nd gr is using @Skype to connect with the @CapstonePub team to learn more about PebbleGo. #tlchat #edtech pic.twitter.com/ZHMFW0pjcy

We opened our Skype by giving an update on the statistics from our Barrow Peace Prize Projects. At the time of our Skype, our work had been viewed in 121 different locations around the world, according to our Smore page.

The Capstone team introduced themselves and then launched into telling students the process that the team goes through to decide on and create articles. We learned that PebbleGo has been used by over 260,000,000 students around the world. 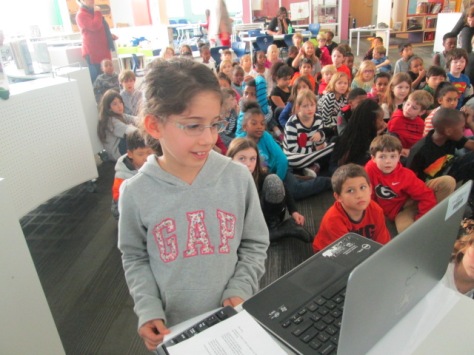 Our students took turns lining up at the computer to offer answers to the questions from Capstone, and those comments and questions sparked additional conversation.

Our students expressed their love for how PebbleGo reads to them, has videos, is broken up into sections, and has info on lots of people.

This then took us to the question about what Capstone does with all of the wishes that it gets from its users. We learned about how they keep lists of wishes and start to notice patterns of requests. When something is requested enough, it might be put into PebbleGo or it might even come up for a vote from PebbleGo users. Within this conversation, we learned that it takes several months for an article to go from an idea to the final piece we see in PebbleGo and the work happens in multiple locations including New York and India.

I loved how the Capstone team listened to our students and how flexible the conversation was with over 100 students. We were well prepared with our student comments and questions, but there was plenty of space to find tangents that revealed more information for our students.

One of the things that I heard from Capstone is that they go through the same kind of research that we are asking our students to go through. They gather their information from multiple sources, create many drafts, and review their work before it is sent out to an audience. It was important for our students to hear this from a major company and see the connections to what we are doing in school.

Thank you so much to Amy Cox and the Capstone team for making this Skype happen for our students today. It was a wonderful addition to a project that has meant a lot to our students.

Many thanks to the @CapstonePub team for connecting with our 2nd graders for their Barrow Peace Prize project. @capstonepress

Ms. Kelly’s Kindergarten class has just amazed me across this year by how they have used a study of space to flow into so many of their standards.  They have written their own ebooks, composed music, written lyrics, researched multiple questions, and now they are coming up with a plan to help the people who want to go on a one way trip to Mars.  During the course of this study, an interesting question came up.  Why do we explore space in the first place?  It’s something we haven’t even considered during all of our research.

It came about because of an email that Ms. Kelly got about a virtual field trip to NASA’s Goddard Space Flight Center.

30 minute virtual field trip begins at 1:00 PM (ET) and is appropriate for all grades. Get a tour of a NASA facility and learn about the research being carried out into planetary exploration. Learn why it is important to explore the universe and how our knowledge of the universe has expanded due to the space programs. Understand the multitude of scientific practices involved in space travel, and see the application of many of these in the real world.

The virtual field trip is next Friday May 1, 2015 at 1PM EST.  It’s appropriate for all grade levels and it’s free!  All you have to do is register and you can even have students submit questions ahead of time.  http://www.discoveryeducation.com/Live/of-the-people-space-day-2015.cfm

Ms. Kelly wondered if we might explore the idea of space exploration a bit before students engage in the virtual trip.  I’m brainstorming about this right now, but I first wondered about putting the question out to more people.  I wonder what all of us think about why we should explore space or even why we shouldn’t.  I decided to make a Flipgrid.  Anyone can post a 90 second to this grid responding why we should or shouldn’t explore space.  I would love to have kid voices and adult voices from multiple perspectives to share with this Kindergarten class.

If you have a moment, reflect on the question and make a video.  If you have even more time, do this with your own students in the next few days.  If you don’t have time to make a video, consider sharing it with someone who might.

My thinking at the moment is that I will share these videos with my Kindergarten students as an opener.  We’ll take time to read some books such as The Planet Hunter or Moustronaut and reflect on the question ourselves.  Then, students will have a chance to add their own ideas to the grid along with the other voices.  http://flipgrid.com/#c6c0c1f0

Ms. Kelly and I never know where we are going to end up.  We just keep our minds open, look for opportunities, and give it a shot.  We usually find that our risk-taking leads to some miraculous opportunities for our students. 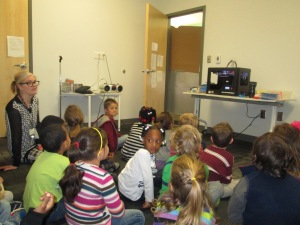 Today, Mrs. Kelly Hocking brought her Kindergarten class to the library to begin 3D printing their creations that they made with the Blokify app on iPad.  It has been a few weeks since they made their creations.  After they left the creating session, 5th graders helped email all of the files to me.  We put them into Makerware, made them smaller, and sliced the files for 3D printing.  All of the files went onto the SD card to be ready to print. 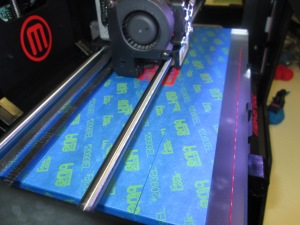 Today, they all sat in front of the 3D printer.  We spent some time talking about what a 3D printer is and looked at some of the creations it had made.  We also talked about the safety of not touching the printer while it is printing due to the heat and the fact that bumping the printer could mess up the print.

Finally, we cued up a file on the screen and the student came up to press the M to start the print.

They loved watching the build plate raise to the top.  There were even oohs and ahhhs as the printer was heating.  Once the printing started, we let one student at a time come up to peek inside and see what 3D printing looks like.  They were all amazed.

Mrs. Hocking is working with all of these students to stretch their imaginations.  They are going on a virtual field trip to Boston over the next few weeks and along the way they are virtually stopping in each state and learning something about that state along the way.  For example, next week we will read the book Suryia and Roscoe: The True Story of an Unlikely Friendship and visit the sanctuary where they live in Myrtle Beach South Carolina.  Mrs. Hocking is having the class imagine packing a virtual suitcase that they can put anything in.  Today, they want to add the Makerbot to their suitcase.

Over the next few days, the Blokify creations will continue to be printed until all 21 are done.  Then, the imagination and creating of stories will begin.